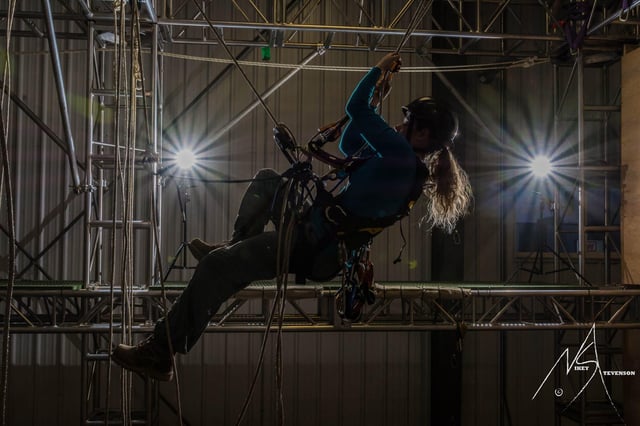 As with most trades, women make up a smaller percentage of the workforce compared to men. However, like so many of our industry counterparts, an increase in the number of women becoming certified in Rope Access is on the rise, no matter how slowly. Leslie (Level 3 IRATA), an adventurous local rope tech from BC (originally from New Zealand), created the popular Facebook Page, facebook.com/womeninropeaccess - the only Facebook page devoted exclusively to featuring and sharing women working as Rope Access Technicians on a global scale. She has since gone on to create her own website, Women in Rope Access, to create a more in depth reader experience and understanding of the female perspective in a highly male dominated industry. Go Leslie! 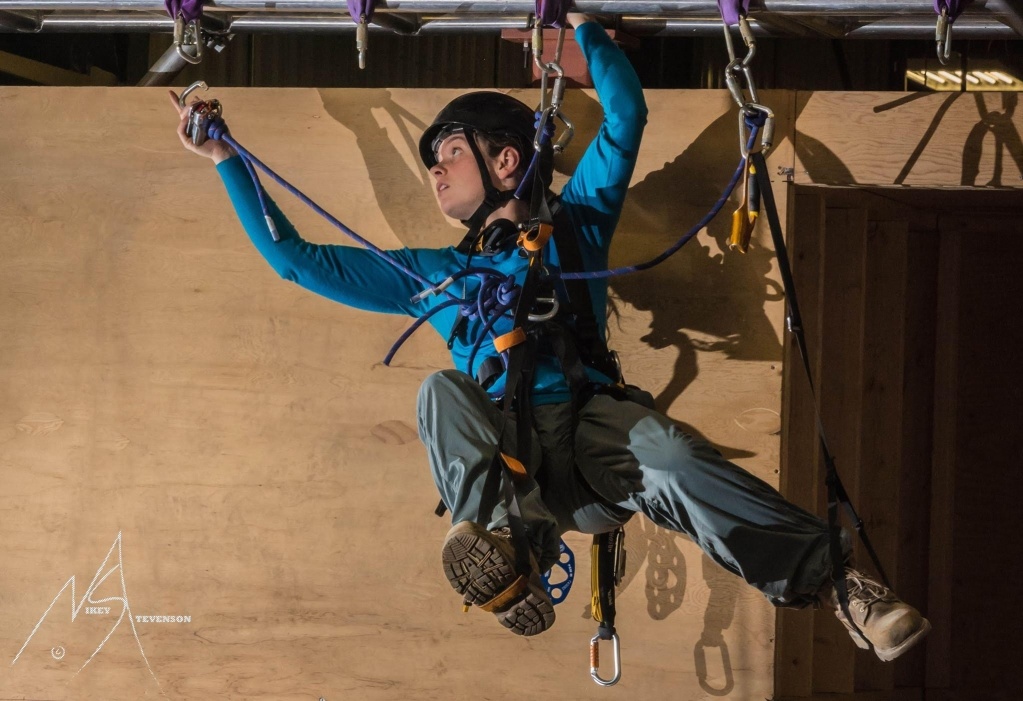 So, without further ado, I'd like to introduce you to an awesome Tech, Leslie Poulson:

First of all, we are all dying to know, what gave you the incredible idea to devote a Facebook page to Women in Rope Access?

Unfortunately I don’t have a very inspirational answer for you. It had rained all week, I was bored, I wanted to see how many women did this around the world and what areas of rope access they got into. Nothing existed yet, so for a laugh, I thought I’d start a page on Facebook. Maybe a few of my friends would pity-like it and it would be a fun thing to do on a rainy day. Then it grew like mad.I also liked the idea of being the admin/moderator of a page like that, so that if the comments started to get out of hand, like on other rope access Facebook pages, I could simply block offensive people and delete their comments, you know? Create a place where everyone felt confident about posting their work pics without the general abuse that follows on so many of those other pages.

Are you still so shocked at how many people follow you?

What do you think it is about women in Rope Access that gets people so amped?

1) Men like to look at women. I don’t mean that in a negative or accusational way - it’s just biology. 80% of the Facebook page likes are men.

2) The novelty factor - there aren’t that many of us per rope-technician-capita. And the women, especially if they’ve never worked with another woman on the job, are probably really curious about how many others are out there and where they are and what they’re doing just like I was.

3) Rope access produces sick photos - so the sharing of those pictures is a very large part of the culture for techs. Regardless of the gender of the person sitting in the harness, ropie pics are always popular with other ropies.

How long have you been a Rope Access Technician?

What was the reason for you getting into Rope Access?

I was at a bit of a loss for where to take myself with my previous training (science degree). The work I was doing was interesting and adventurous and awesome, but paid absolutely rubbish and consumed my entire summer, so it was time for a change. I’m a recreational climber and I already knew a number of people doing it, so I thought I’d give it a go. Honestly, my biggest concern going into my IRATA L1 course and starting my first job, was that I wouldn’t be good enough because I was smaller and weaker than everyone else. Now I know better.

Have you seen the industry change for women since you got your start?

I’ve only been doing it for 3 years so not really. I have noticed a ton more females working for our company over the last year or so, but I don’t know if there are more women as a percentage doing rope access, or if the rapid increase in all rope techs, male and female has just seen the numbers increase proportionately. It would be interesting to find that out, actually. The very first day of my very first job I was asked if I was the safety person, because I was the only girl on site. This exact same thing happened not even a week ago - so no drastic changes in the old school way of thinking yet, haha.

It’s more amusing than anything.

What is it that makes you excited to get on rope and get on a job?

My favorite thing is being a non-ticketed, rope tech. Obviously I’m not as sought after as your journeyman insulator rope tech for example, but I get to do something different almost every job. I’ve done all sorts, from inspection, electrical, pipe fitting, welding, insulating to signage, window cleaning and stadium work, not to mention all of the rest that falls in the ‘other’ category. Watching all of these tradespeople do their thing, learning wee tidbits about each one and becoming experienced in how to deal with different challenges that arise with each job type is an awesome learning experience and keeps things interesting.

I also hate working-out with a furious passion. Being able to stay fit by going to work and without having to go to the gym or for a run, is amazing. 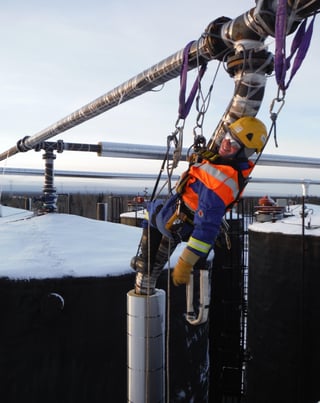 How would you describe the Rope Access lifestyle? Do you consider it as such?

Honestly and with all due respect, I’ve never really understood that way of describing it. At the end of the day, it’s a job, just like an accountant or a bricklayer. It’s an awesome job of course and most of us absolutely love it, don’t get me wrong! But we have lives outside of rope access, just like accountants or bricklayers and I think that’s incredibly important (says the hypocrite that spends every waking minute working on her damned rope access website ). My partner and I (both rope access techs) live what we consider to be the ideal lifestyle in the middle of nowhere, able to drop everything and bugger off on holiday for a few months. But that’s not a rope access lifestyle, it’s a lifestyle that we chose and that our jobs’ in rope access facilitate. Most of the people I’ve worked with in rope access don’t necessarily live this way.

Do you have any plans to take your certifications to work somewhere else in the world? Maybe visit one of the girls on womeninropeaccess.com?

I would love to! I’ve already done a 6 month stint in Australia and that was an amazing experience. The only problem is the language barrier - all the places I would want to go to work, they’d be speaking something other than English. You have to be able to communicate well in this job and I’d hate to be that gimp in Sweden (or wherever) that doesn’t understand the job task or can’t communicate on the radio because she can’t speak the language!

But yes, meeting these awesome women I’ve had the pleasure of communicating with lately, is something I’d be pretty excited about.

Definitely the construction of the new ice hockey stadium (Rogers Arena) in Edmonton. It was my first stadium gig and it was the complete opposite pace and work style to that of the refineries that are my bread and butter. The climbing was constant and fun, the work was varied, the people were good and the exposure was real. Super good experience!

And on the flip-side, have you encountered a job that you found particularly challenging?

There’s no one job that has been any worse than the rest that I can think of. My most challenging time is winter in Northern Alberta. Frozen ropes, gear that doesn’t work below certain temperatures, walking around like the Michelin man in a million layers plus harness over top (then taking it all off to pee).

Where do you see the future of Rope Access in Canada?

That’s a tricky one. The downturn has seen refineries abuse the excuse to cut costs which gets filtered down to us workers. So the cynic in me is concerned that we’ll end up like the UK - flooded with techs with rates getting lower and lower by the day. On the flip side, rope access is also growing really quickly in Canada and the downturn has actually aided that. Companies are really looking at budgets and seeing how much cheaper we are than traditional access methods, so it’s a positive thing that rope access is being adopted as the primary means of access more and more.

I guess we’ll just have to wait and see.

What’s the question you’re asked the most about what you do?

From random people outside the industry: “So have you dressed up as superheroes on children’s hospitals”? P.S the answer is no, but that would be sweet.

Other tradesmen just want to know how much money we make. And of course … “how the hell did you get into THIS?” and “you’re f**king crazy”.

So, that is Leslie (Thanks, Leslie!!)! And she continues to travel, prioritize adventure and live a wonderfully secluded life in the wilderness of Bralorne, British Columbia.

Read more about some cool Rope Access Technicians by clicking below! 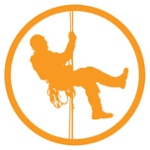